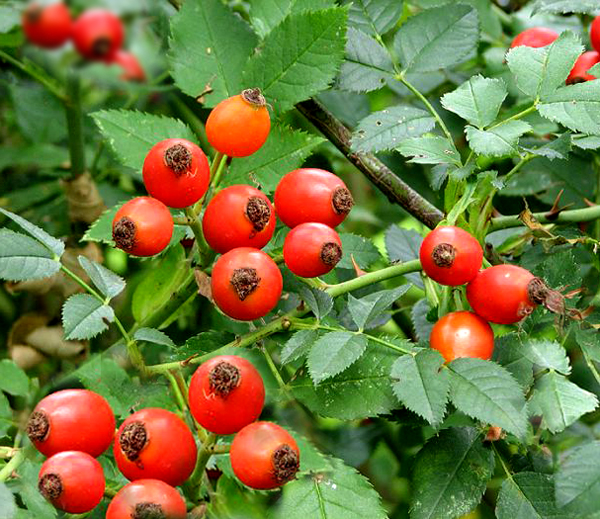 Rosehip is a common species of shrub that grows in the northern hemisphere in temperate and warm zone. In Poland, it is often found in the bushes, on the edge of the forest, balks and along the roads.  Roses were planted already in Ancient Babylon and Persia, from where they reached Greece and Rome. In ancient times juice from fresh flowers and tincture of leaves were used for medicinal purposes. A well-known measure, used in bites by rabid dogs, was the bark of the roots of the rose.  Greeks used roses also for cosmetic and culinary purposes.  Baths in rose water were very popular and fruit were added to the dishes and wine was prepared from them.

The pharmacopoeial raw material of rosehip are the seed heads, gathered from early autumn to winter.  They are a rich source of vitamin C, or L-ascorbic acid.  Its content depends on the time of harvest, drying methods and the method of storage of fruit.  Vitamin C strengthens our immune system, protecting the body against colds and flu.  It is especially recommended in the states of weakness, fatigue and stress.  Due to the presence of polyphenols, wild rose extract also exhibits antioxidant activity.  The raw material also contains minerals, carotenoids, flavonoids, tannins and organic acids.

Rosehip, apart from use for medicinal purposes, is also used in cosmetology.  Rose oil, which is used in perfumery and aromatherapy, is obtained from petals and seeds.

Extract of rosehip fruit is contained by Echinasal syrup, which is a traditionally used prophylactic agent during periods of reduced immunity.