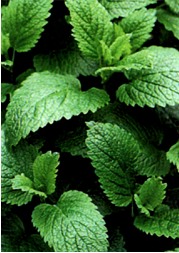 Lemon balm is a perennial plant of the mint family.  It occurs naturally in the Mediterranean climate and in Poland is mainly a cultivated species.  Its leaves give off a strong lemon scent.  Lemon balm has been known in medicine for over 2000 years. Alchemist Paracelsus prepared with its herb a preparation called primus ens melissae, which in the eighteenth century was considered as “restoring youth.” According to Greek mythology, Melissa is the name of one of the nymphs that so implored Zeus, that the god turned her into a plant with wondrous scent that attracts all the insects Hence the name Melissa, meaning in Greek “honeybee”.  In Europe, the plant was spread by medieval monks 1,2.

The herbal raw material is a leaf of lemon balm, containing the essential oil, tannins, phenolic acids and mucus.   Rosmarinic acid is a chemical compound isolated from raw material, which is pharmacologically active.  It is credited with antibacterial, antioxidant, antiviral and sedative effects. The mechanism of sedative effect of the extract from the raw material, is associated with the impact of rosmarinic acid on neurotransmission of impulses in the central nervous system, and specifically in the so-called GABA-ergic system 3,4.  Extract from the leaves of lemon balm also demonstrates spasmolytic effects on smooth muscles of the gastrointestinal tract.

Sedative effects of the extract from the leaves of lemon balm, is a constant subject of scientific research in the world. This applies both to monopreparations, containing only extract of this specific raw material, as well as complex preparations.  In 2011, the study was conducted on 20 people between 18 and 70 years of age, who felt stress, tension, and reported difficulties with falling asleep.  The study group of volunteers was taking two tablets a day of lemon balm extract, standardized for rosmarinic acid content – one in the morning, another in the evening before going to sleep.  After 15 days of treatment, 19 out of 20 participants in the study reported improvement in mood.  The time of falling asleep was shortened in them, the quality of sleep improved and anxiety during the day was reduced 4.
The extract from the leaves of lemon balm is part of several products Herbapol Wrocław.  It is contained by an oral liquid Nervosol and syrup Melisal forte.  Both formulations have a calming effect and reduce nervous tension.  The raw material is also present in the composition of an appetite enhancing syrup – Amarosal. 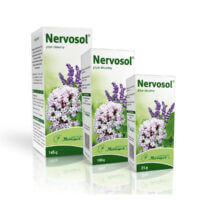 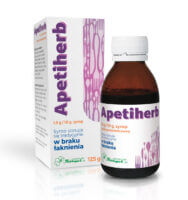