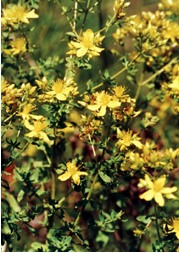 There are the two most distinctive features of St. John’s wort: transparent spaces on leaves containing essential oil (that is why St. John’s wort is called H. perforatum) and fluorescent red sap appearing if the plant is damaged. Both the features have made St. John’s wort recognized across the centuries (its pollen was found inter alia in Biskupin) as a magical plant of outstanding medical properties. Many of those properties were confirmed by modern pharmacology examinations, even magic could be explained reasonably. It was found that St. John’s wort is a sedative, reduces nervous tension, including premenstrual, disperses night fears and nightmares, prevents unconscious bedwetting in children, as well as spasms of smooth muscles of gastrointestinal, biliary and digestive tract. When administered externally, St. John’s wort helps in burns, frostbites, bruises, injuries (especially in deep wounds with nerve damage) and neuralgia, sciatica and elbow pain (tennis elbow). St. John’s wort herb is a main ingredient of Apatinac tablets.