Certainly, many people know scaly green inflorescences, which under the name artichokes are eaten as a vegetable of high nutritional value. In Poland, this vegetable is not very appreciated, and is very typical for Italian cuisine. The edible part of the artichoke is its “heart”, i.e. the fleshy floral bottom and the lower part of the cup.
The artichoke is a perennial plant originating from Ethiopia. It is now grown in the Mediterranean climate of Southern Europe, North Africa and the Canary Islands as a refined variety of artichoke. Already in Ancient Rome artichoke leaf was used in medicine as a cholepoietic, diuretic and liver function improving agent. One of the first authors who described the properties of artichoke was a pupil of Aristotle – Theophrastus. References to this plant also appear in “Natural History” by Pliny the Elder. 1,2,3
The raw material used in medicine is a fresh artichoke leaf and its herb. The plants harvested during the flowering period are then thoroughly dried. The main active compounds obtained from raw materials are cynarin and flavonoids. Cynarin demonstrates a cholepoietic and cholagogic effect. Flavonoids (luteolin) reduce lipids and cholesterol levels in blood. Moreover, the extract has a protective effect on the liver parenchyma. In scientific publications, more and more frequent reports appear on the antioxidant effect of artichoke extract. 4
Clinical studies aimed at proving and describing the properties of artichoke were already conducted in the 1930s. One of the largest studies, which included 417 people, was carried out by Held and partners. Patients who took part in the study reported symptoms related to the gallbladder and liver function disorders. They were administered standardized artichoke extract for 4 weeks. After that time, reduction of the ailments and better mood were found in more than 80% of the subjects. 5
In 2000, a study was published confirming the beneficial effect of artichoke extract on cholesterol level. The study involved 143 patients diagnosed with hyperlipoprotheinemia. After 6 weeks of treatment with standardized artichoke extract, a significant decrease in total cholesterol level (18.5% compared to the results before the beginning of the study) and LDL fraction (22.9% compared to the initial result) was observed in the study group. 6
Artichoke herb extract is a component of the medicinal products of Raphacholin C and Cynarex. Both drugs are traditionally used in indigestion, digestive ailments and disorders of gallbladder contractile activity. Cynarex can also be used as an auxiliary agent in hypercholesterolemia, as a means of lowering serum cholesterol and triglycerides levels. 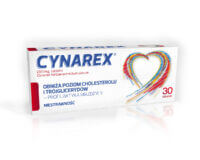 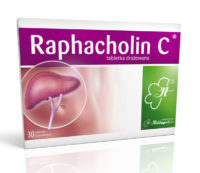 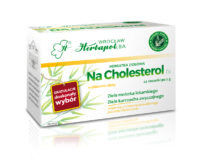